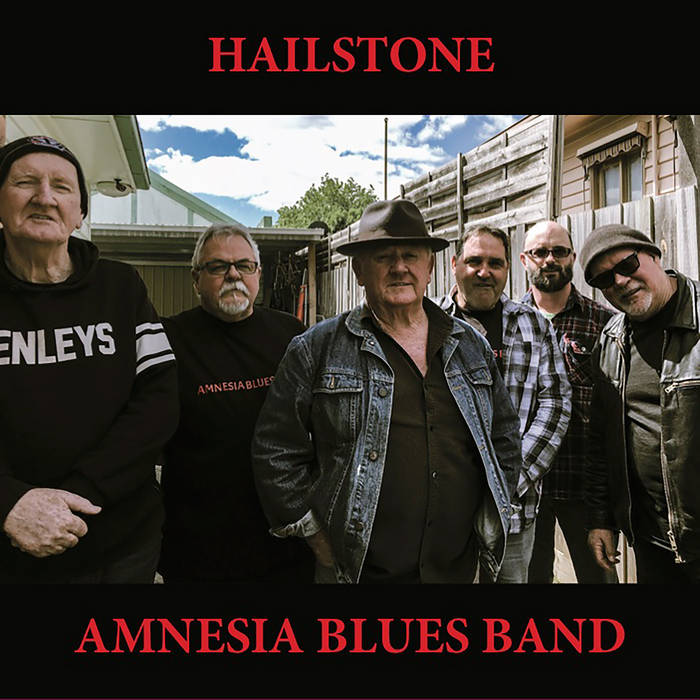 ABB – HAILSTONE
On a cold, rainy Saturday morning in October 2018, Gippsland’s Amnesia Blues Band filed into Paulie Bignell’s Hailstone Studio as men with a mission. On Sunday afternoon, the band headed back East with twelve workable songs in the can. Into this world comes Hailstone, Amnesia Blues Band’s iron-fisted second album.

In the aftermath of their 2015 debut album, We Still Remember, the dynamics of Amnesia Blues Band began to change demonstratively. The departure of lead guitarist Blake Sadler moved bass guitarist Sandy Clark onto lead and slide duties. Darryl Kerr, a dyed in the wool Gippslander, obligingly stepped in as the new bass player. Second guitarist, Ning Hopkins, also a Gippslander, was then recruited to add a bit more kick to the engine. Dennis “Salty Dog” Trevarthen, who appeared on the band’s debut album as a guest, later became a full time member and, over time, his vinegary harp became an integral component of the ABB’s overall sound.

Meanwhile, front man and songwriter Paul Buchanan kept things ticking over until he had a dozen songs ready to go for the follow-up album. Seven originals and five well- chosen covers finally made selection for Hailstone and then it was off to the races. Buchanan and band go full throttle on the opening track, I Never Loved You Anyway, a harsh tale of a fractured relationship full of recrimination where Buchanan’s hoarse roar is ably supported by Ning’s spiky lead guitar.

An elegant slow blues takes over on Out Of Time which allows the band to stretch out behind Buchanan’s measured but soulful vocal. The upbeat lyricism of Thank You Babe is wrapped around a Texas jump blues feel and offers enough room for Ning Hopkins’ Freddy King informed guitar break while guest picker Paulie Bignell keeps things grounded with an unobtrusive Eddie Taylor-like undercurrent.

As a songwriter, Buchanan prefers to tell stories rather than wallow in shop-soiled blues clichés. The low key, smouldering Nullabor Blues carries a narrative of comeuppance and desolation while, sound wise, Buchanan’s hushed vocal and woody acoustic guitar together with Clark’s moody electric lead and Trevarthen’s dusty harp bring in the right amount of menace and dread.

The storytelling spills over into Fast Johnny Cool, a Tony Joe White-slanted swamp Blues where a cocky guitar slinger swaggers into town and gets his just desserts. The song gets its inspiration from a throwaway line drummer, Stuart Anderson, made about “groupies in the green room” at a not so long ago Gippsland gig. Buchanan’s inner songwriter knew there was a track waiting to happen in Anderson’s quip and, at one stage, thought of making it the album’s title.

Buchanan’s love of Muddy Waters comes through unashamedly on Hailstone. Both Two Trains Running and Champagne And Reefer are given thunderous treatments – Clark and Hopkins let their guitars head for the hills while Trevarthen’s gob iron blows up a storm around them .The solid grunt of the Anderson/Kerr rhythm machine does its job with little fuss and no prettiness. At the same time, both tracks showcase some of Buchanan’s most fevered blues wailing.

Ironically, the album’s most light-hearted track comes from Waters’ pen. An easygoing shuffle, No Escape From The Blues, is the one patch of blue among The ABB’s thunderclouds. Built around Trevarthen’s warm harmonica and Clark’s muted slide, Buchanan sings the humorously down and out lyrics in an understated husky croon.

A proudly self-contained unit, Amnesia Blues Band are particularly choosy when calling on outside help. Paulie Bignell, who guested on one track on We Still Remember, is recalled for extra duties. A piercing Bignell slide guitar runs through Fast Johnny Cool adding plenty of dark ambience. Buchanan and band decided to give Tommy McClennan’s rural blues, Crosscut Saw, a Bo Diddley kick up the backside and invited Bignell to the party. A player who understands that there’s room for humour in the blues, Bignell throws in a quirky guitar figure that sounds like a buzz saw with a mind of its own and it works wonderfully on a track that lets the band share in some sonic fun.

Newest acquisition, Arizona’s Roger C.Johnson, came out of left field. An American guitarist with an enviable CV, Johnson had become a long distance fan of ABB and happily took up the band’s request for some participation. Over five decades in the business, Johnson has recorded and toured with Linda Ronstadt, Tom Waits, Seals & Crofts, Michael Nesmith, Wayne Berry, Guthrie Thomas and Rick Nelson but is best remembered for his memorable Southern Rock guitar intro on The Sanford Townsend Band’s 1977 blue-eyed soul hit Smoke From A Distant Fire. Like the seasoned pro that he is, Johnson steps into the roadhouse R&B of Borough Blues and drops some razor- sharp Buddy Guy meets Mike Bloomfield guitar licks that weave their way expertly around the gauzy bounce in Buchanan’s vocal.

The remaining non-original is an adventurous take on Mississippi born, Texas based blues growler Omar Kent Dykes’ Life Without You, a 1995 album track that exposed Omar’s love of southern soul men like Bobby “Blue” Bland and James Carr. In ABB’s hands, the soulful slow burner becomes a testament to the unit’s expertise in blues and R&B idioms. Buchanan uses the full range of his vocals, guitarist Clark plays with a veteran’s sense of economy, drummer Anderson pulls back and lets bassist Daryl Kerr explore some Memphis soul feel while Hopkins’ washes of wah-wah guitar ice the cake.

Buchanan chose to end the album in the same way it began – blues drenched, loud, impassioned and rocking. Gotta Move On, a poignant dedication to Buchanan’s deceased brothers, begins as a stark country blues with only a heavily strummed acoustic guitar sitting behind Buchanan’s ghostly growl. The gears shift when the rest of the band kick in and stir up a soundscape that’s more Bad Company than Big Bill Broonzy. By the time the rough-edged elegy drives itself into the mystic, Buchanan is practically howling at the moon.

On an artistic level, Hailstone is about a band confronting the sometimes mythical “difficult second album” concept and wrestling it to the ground. Amnesia Blues Band did just that and walked out of Paulie Bignell’s studio as winners. Now raise your glasses up to the sky.

Special thanks to Doris - Queen of the Good Vibes.

Amnesia Blues Band are a traditional blues band, bringing you original blues with stories of hard drinkin' women, lost loves and broken dreams. No funk, no soul, no rock and roll - just blues and boogie all the way!

Bandcamp Daily  your guide to the world of Bandcamp

Featuring Gary Bartz, 5 years of Rhythm Section Intl and an LP of the week by Nicolas Jaar